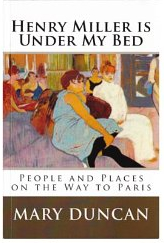 The Paris Writers Press acquired the rights and published a new edition in 2011 with photographs, a new cover and an epilogue.

Granddaughter of a bootlegger, Mary grew up in National City, a blue-collar suburb of San Diego. She did well in school and married a Protestant minister. As a professor at San Diego State University, she researched war- torn playgrounds in Belfast and Nicaragua.

For nearly two decades, she had a personal relationship with 60’s guru Max Lerner, much of it at the Playboy Mansion West. A United Nations conference took her to Moscow where she later founded a Shakespeare and Company Bookstore.

Mary now lives between La Jolla, California and Paris, where she created the Paris Writers Group. She is working on a new book about love, literature and death on a Paris street.

Henry Miller is Under My Bed is available at Shakespeare and Company Bookstore in Paris; D.G. Wills Bookstore in La Jolla, California, and Amazon.com.

ORDER: Henry Miller is Under My Bed: People and Places on the Way to Paris on Amazon kindle version or Paperback