*The Pornographer or Prostitution Reformed will be published in English in 2018. 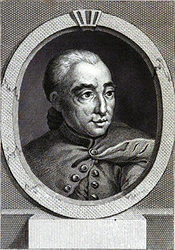 The Pornographer or Prostitution Reformed (1769) was written by Nicolas-Edme Rétif de la Bretonne (1734 – 1806), a French writer who repeatedly challenged the limits of censorship. Rétif, who was a literary rival of the Marquis de Sade, used several names and pseudonyms. Their rivalry grew more bitter when Rétif wrote L’Anti-Justine (1798) as a criticism of Sade’s Justine.

His eighteenth century treatise The Pornographer or Prostitution Reformed is the book from which the modern term pornography was derived. Rétif provided a historical context for the discussion of prostitution and pornography in today’s world. His forty-five articles for reforming prostitution, which were first published twenty years prior to the French Revolution, included a series of recommendations for the regulation of prostitution by a Board of Governors, who would oversee the prostitute’s health, safety, accommodations, pay, children, retirement, cultural activities and education.

Rétif established a pay scale based on the prostitutes’ appearance, age, education and availability. The male clients were not overlooked. The regulations included guidelines and penalties for men who were not clean, carried venereal diseases or were a threat to the prostitutes.

By today’s standards, the title is misleading. This book is clearly not pornographic. In the 17th and 18th centuries, following Rétif’s lead, the word “pornography” described writings related to prostitution. It was not until the late 1800’s that pornography included literature, films and art. Rétif also coined the psychosexual term “fetish” when he wrote Fanchette’s Foot, which focused on his own obsession with small feet and shoes.

During his later years, Rétif lived, worked and died on the Rue de la Bûcherie in Paris. Over his lifetime, he wrote an estimated 187 volumes, often composed while he stood at his own printing press.

The French and Italian film, “La Nuit de Varennes” (1982), provided a fictional account of Rétif’s, Casanova’s and Thomas Paine’s attempt to follow Louis XVI and Marie Antoinette, as they tried to flee the mobs during the French Revolution.

The Introduction by Amy Wyngaard, the author of Bad Books: Rétif de la Bretonne, Sexuality, and Pornography (Universty of Delaware Press, 2013) provides the book’s historical and social background.  Drawings from university and museum archives will be included.

Rétif’s books that have been translated into English include: